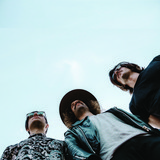 White Bats returned to the stages in 2019 after a break. They have returned with strength and a consolidated formation, their characteristic and personal sound, adding new elements, their spectacular and devastating live performance that leaves no one indifferent, more attitude and freshness than ever. Víctor Ferrero (drums and percussion), Jake Feijóo (guitar and synthesizers) and Álvaro Ibáñez (vocals) are in top shape.   The emergence of White Bats (Madrid, 2014) in the indie scene provoked effusive reactions instantly after the publication of his impeccable first EP "White Bats". They build magnificent themes, designing a tense and expansive sound, updating in the dark an attitude full of style. In September 2015 they signed for Subterfuge Records, the label under which their second EP was published in January 2016, "Complex Echoes".   White Bats have played at the most important venues in Madrid: Ochoymedio Club (Sala But), La Riviera, Joy Eslava, El Sol, El Sótano or Siroco among others. They have also visited Barcelona (Apollo), Valencia and many other Spanish cities.   They performed at festivals such as Tomavistas, Festival do Norte, Loro Facu or VdeValarés, among others.   Since their formation in 2014, they have performed more than 50 gigs in front of thousand of people.   After a period of inactivity, White Bats are in top shape and returned to the stages in 2019 with a reformed formation, many future plans and some brand new music.