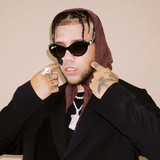 Puerto Rican-born artist Jhay Cortez, is the leader of a new generation of Latin artists, with over 32 million monthly Spotify listeners and more than 6 billion combined streams. Cortez has been producing and composing songs since he was 14 years old, bouncing between his hometown of Rio Pedro in his birth-country and New Jersey. It was at this age that he first discovered his love for the new wave of urban music that was on the rise - the sounds of reggaeton and the songs of Don Omar. With over 6 billion career streams, Jhay has shown the world that he is a talented songwriter and singer. This Latin GRAMMY winner is the mastermind behind some of the biggest Latin hits in the world, including DÁKITI, No Me Conoce (Remix), Medusa, among others. With Christian Dior he undoubtedly continues to break barriers, positioning himself as one of the leaders of the genre from the new generation.

Jhay Cortez stands out within the urban genre for being one of the most unique and original voices, not only for his compositions and rhymes, but also for his magnetic stage presence. He has been praised and recognized not only by the media and some of the genre’s heavy hitters, but also by fans around the world. His debut album Famouz positioned itself on the Top 10 of Billboard’s Latin Albums for over 70 weeks. With his latest releases, Jhay tees up another phase of his culture-defining career with his upcoming sophomore album 'Timelezz'.