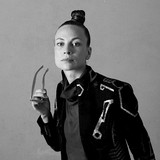 German singer and producer Leona Berlin offers an atmospherically dense, Hiphop influenced Alternative Soul. “My top priority is to be authentic without having to fit in a box. I would like to give an example of how authenticity is needed and demanded, especially in today’s media superficiality.“ She writes and produces her songs herself, inspired and influenced by her greatest role models as well as close musicians and producers from her team. With her unique style, her passionate, multi-layered singing and her open, direct nature, she gives the listener a deep insight into her world. After the release of her debut album "Leona Berlin" in 2018, several singles followed, including "Feminine Energy", "Wrong Lane" feat. Snoop Dogg and "High Life" feat. Sedric Perry. Other international artists she worked with include Ray Angry, Casey Benjamin, Burniss Earl Travis, Gregory Hutchinson and Karriem Riggins, among others. Currently Leona is finishing her umcoming album „Change“, which will be released in November 2021.