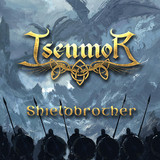 Hailing from Maryland, USA, dual-violin fronted ISENMOR sing tales of harrowing battlescapes and historic foes in their “gewyrdelic folk metal” style: a blend of metal, orchestral, and folk music, combining intricate violin leads and rich vocal harmonies with a strong guitar-driven folk metal base inspired by the stalwarts of the genre including TÝR, ENSIFERUM, and ELUVEITIE. The name ISENMOR is taken from Old English and translates to “iron wasteland”, referring to the broken and discarded weapons strewn around on the field in the aftermath of a battle. “Gewyrdelic” is an Old English word that roughly translates to “historical”. The meaning of the term, as well as its etymology, describe ISENMOR’s lyrical and thematic focus on the history and legends of the Anglo-Saxon and Germanic peoples.