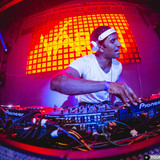 From accumulating over 6 millions plays on his song Paint The Sky, to performing with the likes of Tiesto, Varun is an artist that is taking the EDM scene by storm! Varun's first official remix was released on Ultra Records. His collaboration “Can’t Hear A Word You’re Saying” with X-Change was deemed Demo of the Week on Hardwell’s infamous podcast Hardwell On Air. “Future Underground” a collaboration between him, AVE & EFX and the talented vocalist KASS was supported by Gareth Emery and voted Electric For Life Anthem of the Week. After their collaborative success, Varun teamed up with the duo for several more projects including “Bill Murray” and “Paint the Sky”. Both were released under Trap Nation’s label Lowly Palace with “Paint the Sky”. His remix collaboration with Facade was named one of the top remixes of Marshmello & Khalid’s “Silence” by Billboard.com alongside names such as Tiesto, Illenium and Slushii. In 2017, Varun was tasked to help create music used in the Backstreet Boys: Larger Than Life residency held at Planet Hollywood in Las Vegas. He is currently co-producing with the legendary artist Paul Oakenfold. Some of their collaborations include “Waterfall” ft. Lizzy Land, “Love Escape” ft. Amba Shepherd and “Only Us” ft. Little Nicky. In recent events, he’s been able to share the stage with acts such as Tiesto, Above & Beyond, Showtek, Dada Life, Arty, Nicky Romero, Audien, Morgan Page, Cash Cash, Benny Benassi and many more.