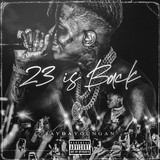 Growing up in a small Southern town, rapper JayDaYoungan rose to fame on sheer talent alone, gaining the attention of millions of fans through his viral videos and uniquely delivered tracks. Early songs followed in the footsteps of influential Southern rappers who came before him, but as he continued to release music prolifically, his style diversified somewhat, as with the R&B-tinged single "Interstate" and more melodic tracks on mixtapes like 2018's Forever 23. In 2020, he released his official studio debut, Baby23. JayDaYoungan was born Javarious Scott in 1998 in Bogalusa, Louisiana. Growing up surrounded by the influence of Louisiana hip-hop legends like Lil Wayne, Kevin Gates, and Lil Boosie, JayDaYoungan got into music at an early age and released his first mixtape, Ruffwayy, in early 2017 when he was 18. He quickly garnered buzz for stand-out songs like "Spinning" and "Taking Off" and gained an enormous social media following in the span of a few months. A quick succession of mixtapes followed, with The Real Jumpman23 arriving in 2017 and Wake Up and Taking Off following the next year. Never slowing down, JayDaYoungan released the somewhat R&B-tinged single "Interstate" in February of 2018; the song and accompanying video quickly racked up millions of views and streams online. 2018 would be a huge year for JayDaYoungan, who released two more mixtapes before year's end, 23 and the Billboard-charting Forever 23. Forever 23 spawned the single "Thot Thot," which was among his most popular to date, racking up millions of streams and video views. Along with this constant output of new music of his own, he also collaborated on tracks with peers like Youngeen Ace, Glitchman, and FG Famous, among many others. Before the year was over, he released the single "No Play Zone" in late December. His next two mixtapes, Endless Pain and Misunderstood, saw release in 2019: both debuted even higher in the charts than Forever 23, and yielded several more viral singles. Less than a year after Misunderstood, JayDaYoungan released his first official studio effort, Baby23. Another Top 50 Billboard hit, the set featured appearances by DeJ Loaf, Moneybagg Yo, and Kevin Gates. ~ Fred Thomas, Rovi