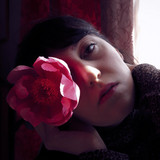 “A songwriter of astute emotional resonance” - CLASH Magazine “One to watch, we reckon” - BBC Radio Scotland, Roddy Hart “Songwriting majesty” - Unrecorded   Emma Miller’s songs skillfully straddle the worlds of contemporary singer-songwriter and folk-pop. Her rich vocals, boundless harmonies and mature songwriting have led to comparisons with artists such as Feist, The Staves, Kate Bush and Joni Mitchell.   Since moving to London in 2014 and gaining a 1st class honours degree in Songwriting, the Scottish born songstress has so far garnered support from the likes of BBC 6 Music, BBC Radio Scotland, Amazing Radio and BBC Introducing as well as successfully selling out her previous headline shows as a solo act.   Her latest release is one of significance as it marks a point of rebirth in this artist's journey. 'Set Me Down' is Emma's debut solo EP and encompasses 5 tracks that cover the themes of relationships, heartbreak and letting go. It was recorded between London and her hometown of Elgin, in the northeast of Scotland where the artist returned at the end of 2019.   https://emmamillermusic.com