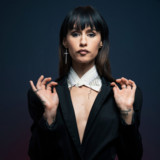 ANNA WOLF creates alternative music with lyrics that are layered with a poignancy that she uses to hypnotize audiences on a journey of self-discovery that may leave you with the feeling of being heard.   Wolf has worked and collaborated with numerous artists and producers such as front man for 'LIVE', Ed Kowalczyk, Ed's guitarist Zak Loy, Ken Stringfellow 'The Posies', Producer Tim Palmer (David Bowie, U2, Pearl Jam, Ozzy Osbourne, Goo Goo Dolls), she has recently also collaborated with the drummer from Stereophonics, Jamie Morrison and producer Pete Boxta Martin (Sugababes, Jesse J, DJ Marshmellow) with Sony-BMG signed songwriter Dantae Johnson.   She performed solo shows at various iconic London venues, including The Bedford, The Troubadour and The Half Moon and performed in high profile festivals including Austin Texas SXSW, South African’s OppiKoppi and The Real Concert Series in The United Kingdom and South Africa.   In 2017 she was asked to open for Johnny Clegg on his final tour played to sold-out audiences in South Africa and London’s exemplary Apollo Theatre in Hammersmith.   Press Quotes:::::::::: “Anna Wolf is such a phenomenal artist.

She has so much passion and authenticity, and she needs to be heard. She is an artist who is not afraid to tackle difficult issues and make you feel emotion, and she is one of the most magnetic and inspiring artists we have ever come across.” - ” Unsigned Only, Nashville Tennessee - Candace Avery and Jim Morgan.