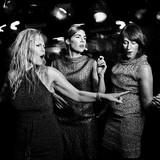 That Driving Beat is a 12-piece Northern Soul band from Stockholm, Sweden. With the focus set exclusively on rare, unusual, unknown, underrated, abandoned or forgotten soul tracks from the mid 1960s and early 1970s, this band probably has the most interesting repertoar among current Scandinavian soul bands. Well, at least we’d like to think so ourselves. Northern Soul is all about rare, low-budget recordings of soul music, primarily from the second half of the 1960s. It’s about a never-ending curiosity for those completely unknown bands and artists who got the chance to do perhaps only one recording, never to be heard of again. It’s about badly pressed vinyl, small editions from obscure and often short-lived ghetto labels from tough and gritty cities like Detroit, Chicago, and Philadelphia, whose records rarely made it out of the local community. The name of the band, That Driving Beat, has been borrowed from the title of one of the amazing songs of musician, song writer and producer Willie Mitchell (1928–2010).