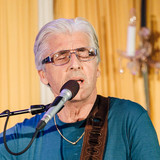 Terry Oldfield is a world renowned musician best known for his unique style of flute playing. He has been nominated for a British Academy award and two Emmy awards during his career and has composed music for over 80 Film and Television productions , receiving two Emmy nominations for “Land of the Tiger” and “Twilight of the Dreamtime” and also a British Academy Award nomination as composer for the BBC series “Kingdom of the Ice Bear”. Terry’s career began in earnest when he was asked by the BBC to compose music for a series called “Great Railway Journeys of the World”, He also worked on Meerkats United, which in a National Television Poll was voted ‘Best Wildlife Film Ever’. In the early 1970s, Terry and his brother Mike formed a band called ‘Barefoot’ playing rock’n’roll at colleges and clubs throughout the UK and Europe. Mike later went on to record the highly successful “Tubular Bells” and Terry played the flute at the first live performance at the Queen Elizabeth Hall, London. During an extended stay on the Greek Island of Hydra , he bought a silver flute from a fellow traveller and fell in love with the instrument. “I think it was learning to play in this way, with no formal guidance, that allowed me to develop the ability to compose music. I spent many happy days improvising tunes and discovering scales and arpeggios for myself, and soon started to teach myself to write these things down”.