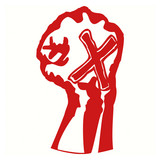 Arguably one of the leaders of the second wave of straight-edge in the mid-'80s, Youth of Today was a New York-based band started by ex-Violent Children members Ray Cappo on vocals and John Porcelly on guitar. Rounding out their lineup in 1985 with Graham Philips on bass and Darren Pesce on drums, Youth of Today recorded and released their debut EP, Can't Close My Eyes, on Positive Force, a well-known straight-edge mainstay. Philips and Pesce exited shortly thereafter, and lineup changes abounded until a five-piece settled long enough to record the band's first full-length offering, 1986's Break Down the Walls. Again, the band had more lineup changes after the release and subsequent tour for Break Down the Walls, and in 1988 a four-piece Youth of Today consisting of Cappo, Porcelly, Walter Schreifels on bass, and Sammy Siegler on drums went into the studio to record their follow-up full-length, We're Not in This Alone (1988). By 1990 Youth of Today had decided to call it a day and released a farewell 7" EP on Revelation (soon to become the leading light in the next wave of straight-edge). Now known as Ray 2 Day, Cappo formed the Krishna-core band Shelter, which Porcelly eventually joined as well. 2004 saw Youth of Today play some reunion shows in America as well as Europe. ~ Christopher M. True, Rovi