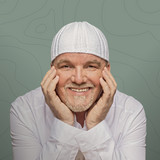 Gerry Friedle (born 7 January 1971) is an Austrian entertainer and singer, better known by his stage name DJ Ötzi. Successful mainly in German-speaking countries, he is best known in the English-speaking world for his 2000 single "Hey Baby (Uhh, Ahh)", a cover version of the Bruce Channel song "Hey! Baby". In 1999, his featuring of "Anton aus Tirol" was a massive hit in German-speaking countries, reaching number-one in Austria and Germany, while it peaked at number two in Belgium, the Netherlands and Switzerland. The song spent 75 weeks in the Austrian charts and was number-one for ten weeks. In July 2000, he released his cover of the song "Hey Baby". This single reached number-one in several English-speaking countries, including Australia, Ireland and the United Kingdom. In 2006, he found success with the hit "Sieben Sünden", which became a number 2 hit in Austria and "I Am the Music Man" under the pseudonym DJ Ötzi Junior, which reached number-one in Japan. In 2007, he released "Ein Stern (...der deinen Namen trägt)" with Austrian schlager singer Nik P.. It reached number one in Germany where it stayed for 13 weeks and Austria, number 2 in Switzerland, and number 5 in the European Union. The single has sold more than 2 million copies. Spending 106 weeks on the German Singles Chart, it is the first song to be on that chart for two years or longer, and the longest running song ever on that chart.