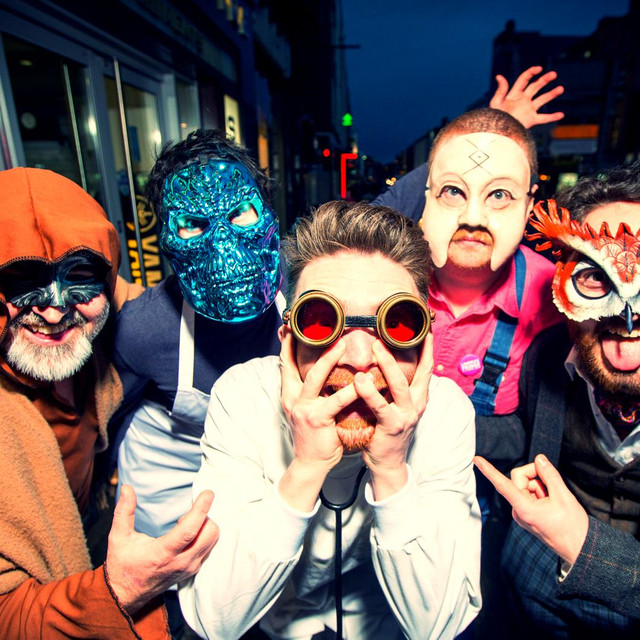 Dr. Mindflip are a collective of musical misfits from Ireland that have been spreading their intoxicating cocktail of psychedelic piano rock since 2013. They have just released their B-movie rock opera Roominations: An Unauthorized Parody - a tribute to Tommy Wiseau's cinematic masterpiece: The Room. "Haunting and insidious...without a doubt one of the most bizarre and overwhelming albums I've heard in a while" -Remy "Like sex for your ears" -2G1 Reviews Meet: The Doctor (maniac ringleader), Owly (narcissistic bird), Dollhead (gently-terrifying enigma), The Sage (funky monk), Senor Bones (drum machine), The Barren (coffee-fueled rage) and George Bernard Caw (prosthetic crow)...together they form a Lynchian lounge act spewing out catchy alternative pop through their rock operas, interactive movies, improvised theatre, and guided meditations. The first 4 EPs are released under a Creative Commons license - with full artwork and lyrics available for download at drmindflip.com. A Brand New You established Dr. Mindflip's trippy flavour, while the stripped-back Is Itching To Play exposed the pensive emotional core lurking beneath. Every Waking Moment and In a garden of fools both expanded the line-up, with a jazzier sound emerging alongside more aggressive playing. Their latest release, Roominations: An Unauthorized Parody, is a twisted, surreal concept album full of surprises. Funded on Kickstarter, it is now available as a limited issue CD and LP.