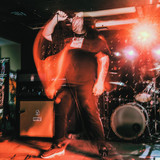 Tapping into the darker side of the hardcore/metalcore stratum, Charleston, West Virginia's Left Behind deliver a sludgy mix of breakdowns and staccato guitar riffage that invokes names like Harms Way, Crowbar, and Black Breath. The band debuted in 2013 with the EP Death, Take Me, followed by the release of the full-length Seeing Hell in 2016, the latter of which was released via Unbeaten Records. One year later the band returned with their pummeling sophomore effort, Blessed by the Burn. ~ James Christopher Monger, Rovi