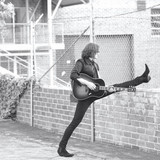 King Leg’s debut album MEET KING LEG (Warner Brothers Sire/Via Records), produced by Dwight Yoakam and Chris Lord-Alge, features 12 tracks, including, “Great Outdoors”, “Your Picture”, “Comfy Chair (A Dream That Never Ends)”, and “Cloud City”.  Upon signing King Leg, Chairman of Sire Records Seymour Stein had the following to say: “King Leg makes American Music. It is Rock ‘n’ Roll, with a nod to R&B and Country – which as we know, helped to usher in Rock ‘n’ Roll back in the 1950s. The lightning rod for Rock ‘n’ Roll was when Elvis Presley signed to RCA in 1956 and put out ‘Heartbreak Hotel’. When I heard King Leg’s music, I was totally blown away – not just by the immediacy of the songs, but also the extraordinary voice – reminiscent of the great Roy Orbison. King Leg may be young, but musically he is fully mature.”