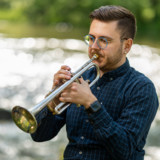 He knew from then on that he wanted to be a performer on the trumpet. Mr. Aleksei graduated from the Oberlin Conservatory in 2017 with a Bachelor of Music degree and continued at the Juilliard School to receive a Master’s of Music degree. His teachers have included Christopher Martin, Mark Gould, Roy Poper, and Michael Sachs. Mr. Aleksei can be heard on both Oberlin Music Label and Naxos Music Label on albums, including Billy Drew’s Under One Sun, Yolanda Kondonasis’s Ginastera: One Hundred, and on a numerous National Orchestral Institute Philharmonic’s American Classics series albums. One of the albums, RUGGLES, STUCKY & HARBISON: ORCHESTRAL WORKS, was nominated for Best Orchestral Performance for the 62nd GRAMMYⓇ Awards. As an orchestral musician, Mr. Aleksei performs with some of the top orchestras today, including the New York Philharmonic, Metropolitan Opera, Richmond Symphony, and Ballet, and has played on legendary concert stages, including Alice Tulley, Carnegie Hall, the Kennedy Center in Washington, DC, the Kimmel Center in Philadelphia, the Metropolitan Opera House, and Symphony Center in Chicago.