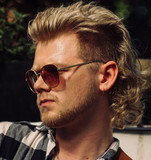 Luke Flear is a 19 year old singer-songwriter and multi instrumentalist from Leeds, UK. After picking up the drum sticks at 2 years old, Flear has had a drive for a place in music history ever since, and in 2017 began touring across the UK as a solo artist with just an acoustic guitar and a piano. Every song he has released has been written, performed and recorded by him alone, including every instrument played in the tracks. Flear’s “genre” remains both broad and yet instantly recognisable in style- tastefully vintage and strikingly modern, and makes him certainly an artist to watch out for.