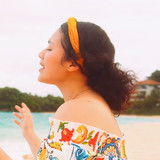 Ali, or “Anica” as she is endeared by family and friends, started singing at a young age and hopped on the bandwagon of being social media famous, before it was the preferred career of the majority of the Gen Zs. Some might know her from her acoustic covers of popular international singer Taylor Swift and local artists like Yeng Constantino as she amassed millions of views in the early 2010's, with a lot of her content going viral after having had reposted by the artists she was covering. With an adventurous heart and an explosive need to express herself with her music, at 22 years old she packed her bags and signed on to sing at a cruise line expanding her horizons to tourists at European seas. Ali Young exudes pure confidence and sings about empowerment, with beats familiar to fans’ senses as it is influenced by Soul and R&B from western artists UMI, H.E.R, and Raveena. Signing with Alibatta Records in 2021, she shifts from doing stripped-down acoustic covers online to nostalgic, more emotive R&B sounds with original words that tap into personal and genuine experiences of women (and men) all the wiser with life. Her debut single "Craving" was released on all major music streaming platforms this June 25, 2021. Ali is also the first artist in Asia to have a simultaneous release of an 'NFT' format for her debut track available exclusively on the Binance NFT Marketplace. Ali is managed by Alibatta, for inquiries please contact business@alibatta.com