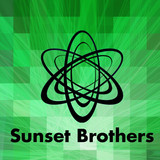 Energic dance, trance, edm, happy hardcore. Call it whatever you want, anything goes for Sunset Brothers. Sometimes driven by vocals an sometimes flirting with old rave classics, but always with a good melody. Sunset Brothers come straight to you from the deep forests of Sweden It all started back in 1997 when two friends teamed up and formed the trackergroup Plastik. The two friends soon became well known in the scene by publishing their work on websites on the internet. At that time their only tools were two computers and tracker software, but upgrading to midi and real synthesizers quickly became a natural step for them, aswell as changing their name from Plastik to something more fresh and starting to publish the tracks on Mp3.com. Aura was now born. The special Aura athmosphere led to a positive response from the Mp3.com listeners. But is was not until the release of their track Destination Skyline things seriously got moving. The listeners simply loved it and within a week the track got to the no.3 spot on Mp3.com overall Top40-chart, fighting against other top artists such as Trance[]Control. Aura is now resting peacefully but you can still find music at spotify or at the website www.auratrance.com. So today we make music for you under the alias Sunset Brothers. You could also check out Hidden Sun if you like more progressive trance or ambient stuff. We also had released music as Labworks &amp; Dynamic