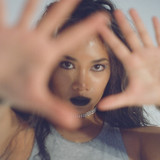 "Industrial, Metal and Synth-Pop had a threesome and made ME" Billie Rogue is the eponymous solo project by singer, songwriter, musician and producer, Billie Roa. She is known for her stage presence, deep vocal range, brutal death metal growls and genre-fluid style; exploring the genres of industrial, dark-electro and post-metal. Rogue considers her work to be a vessel for her inspirations like Nine Inch Nails, Depeche Mode and Bjork--influences that manifested as her debut EP, Eclectric. Other influences include Korn, Slipknot, A Perfect Circle, Puscifer and various metal acts. 'Eclectric’ marked a stylistic departure from her typical ‘acoustic-metal’ sound, into an electronic-industrial path. Characterized by arpeggiated synths and thrashing guitars, it was the birth of a new Billie that embraced her fluidity with highly different genres of electronica, metal, electro-pop and industrial, giving the album its highly varied sonic atmosphere. Since then, Billie describes herself

as "genre-fluid", and has coined the term ever since.