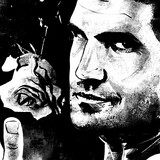 Elay Arson is the synthmetal project of Daniel David Larson & Devin Harrison. Larson, raised in the American Southwest, is a former US Army Sergeant and Iraq War veteran. He has influences and experiences many musicians (and people in general) simply do not. Larson's artistic expression was born of his notoriously obsessive nature, a rejection of the societal status quo, and a lifelong interest in computer music production which has been combined with heavy metal aggression and occult aesthetics.   Los Angeles based indie music label, Kill All Music, first fostered the act in 2016 when Elay Arson was completely unknown. They helped release Larson's full-length Elay Arson debut 'Bloodbath'. By March of 2017, guitarist Devin Harrison joined Larson full-time. Harrison, an outstanding guitarist and guitar instructor by trade, added significant artistic and production value to Larson's existing work. Harrison was initially hired to feature on one track for the 2017 Elay Arson album 'Rites of the Damned'. The two published 16 original songs together that year.  Daniel & Devin have been working on music together steadily ever since. Combined, Larson and Harrison have produced five full-length albums, two EPs and have worked with collaborators and other acts from all over the world.  Currently based out of Colorado Springs, Colorado. elayarson.com