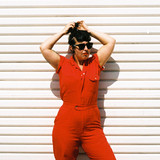 With dynamite vocals and fierce guitar playing, Emilee South hollers throwback rock’n’roll, with hints of rhythm and blues.   South has been rockin’ with an electrifying band, complete with partner-in-crime, baritone-slinging Matt Dixon. In 2017, their record ‘Motel’ was released with a bang and launched to a roaring, sold-out crowd at The Gasometer. Checking in all over the country, they have supported the likes of The Teskey Brothers, Mojo Juju, Ruby Boots, WILSN and The Cherry Dolls, as well as making their debut at Americana Festival in Nashville, TN. Returning home to Melbourne to write and record, South is now set to release devastating new single, ‘Heartbreaker’. Combining elements of psycho-surf and rock’n’roll, it’s a taste of raucous and distorted things to come on debut album. South and band will celebrate the release of ‘Heartbreaker’ with a residency at The Gem, playing shows every Saturday in July, with special guests. Along with another USA trip in the pipelines, 2018 is set to be a real hip-shaker of a year ahead for Emilee South.