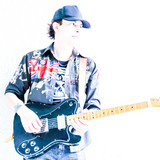 A rocker running in rap circles, singer/songwriter/producer Kevin Rudolf worked on multiple hit songs before making his own bid for stardom as the first rock artist signed to rap label Cash Money. Guitar-heavy songs with the weighty drums and big hooks of pop production became Rudolf's calling card, and he scored a massive hit with "Let It Rock" from his 2008 debut In the City, helped in no small part by a cameo from Lil Wayne. Rudolf was born and raised in New York City. With his mother working as a singer, young Rudolf was introduced to the nightclub scene at a very young age. By the time he got his first guitar at the age of 12, he had already been exposed to all sorts of bands and many different genres of music. His teens would be filled with the usual basement bands and local bar combos, but when he bought a keyboard and computer he was able to break out on his own, recording the genre-blending music he wanted to and learning how to produce and engineer in the process. The one-man band and producer was then signed to Madonna’s Maverick label under the pseudonym Binocular. A self-titled '80s-flavored album from the project appeared in 2001, but beyond some positive reviews it went unnoticed. After scrapping the project, it was through a chance meeting with engineer Jimmy Douglass that Rudolf was introduced to superstar producer Timbaland. He had just planned to watch the recording session, but when Timbaland found out Rudolf could play guitar he had him plug in and contribute to Lil' Kim's 2003 hit "The Jumpoff." It was the first of many collaborations between the producer and guitarist, and soon Rudolf was adding work with the Black Eyed Peas, Justin Timberlake, Nelly Furtado, and David Banner to his résumé. In late September of 2008, Rudolf launched his solo career on the Cash Money label with the rock-rap blend "Let It Rock," featuring special guest Lil Wayne. The instant hit single was a teaser for Rudolf's debut album, In the City, which landed in late 2008. Rudolf was not only the first non-rap artist signed to Cash Money but also the label's first white artist. Following the multi-platinum success of "Let It Rock," Rudolf took off with multiple song placements in advertisements and television appearances. Two years later, he returned with To the Sky, which featured Flo Rida, Three 6 Mafia, and Weezer's Rivers Cuomo. The album produced his second megahit "I Made It (Cash Money Heroes)" and sold respectably. In 2015 he was released from his contract with Cash Money and briefly made music under the name Space Rock before switching back to his given name. Now living in Los Angeles, Rudolf spent the next several years working as a songwriter and producer for other artists while releasing new singles of his own every so often. 2015's "That Other Ship" was followed by "Nobody Gets Out Alive" in 2017 and "I Will Not Break" in 2019. Ultimately, he returned to Miami and continued work on a third album. ~ David Jeffries, Rovi