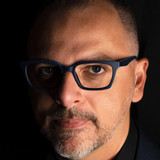 Imre Czomba is a Los Angeles based Composer, Orchestrator, Music Producer, Music Supervisor, and Musician. A prominent figure in the International Music scene since 1993, He is most recognized for his numerous theatrical compositions and productions, including musicals, international events, and dance theatre shows. Imre earned international acclaim for his 18-year collaboration with ExperiDance, a famous dance troupe whose shows premiered in top theaters across Europe and Asia. His international repertoire includes compositions for the 2008 Summer and 2014 Winter Olympic Games, and the 2013 European Judo Championship and the 2006 European Aquatic Championship Official Song. In 2008 and 2009 Imre was selected to compose music for the prestigious Hungarian National Day firework shows, each with a viewership of over 3 million people. These events were the most spectacular and unforgettable moments of his professional life. As a composer, music arranger, orchestrator, music producer, and musician, Imre has appeared on over 110 albums. He has been the recipient of 18 Gold, 14 Platinum and 4 Double-Platinum albums. He has also scored and produced music for over 60 films, television movies, and television series. He is a voting member of the Hungarian Film and the American Television Academy.