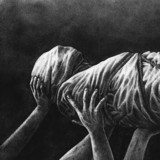 Beginning in 2009 as a thrash/death metal act, Throne of Heresy have continuously evolved and expanded their sound. The first self-released album "The Stench of Deceit" presented an amalgam of thrash and death metal with Tomas Göransson's trademark riffing giving the album a unique style. In 2013, bassist Björn Ahlqvist and vocalist Thomas Clifford had joined the band, and the EP Realms of Desecration was self-released as a way to attract attention from possible labels. Moving away from the sound on "Stench...", the EP featured three distinct tracks which stylistically paved the way for the coming album "Antioch". Antioch was released by The Sign Records and featured a much darker, blacker sound than before. Still remaining entrenched in the death metal roots, Throne of Heresy filled the album with massive riffing and atmosphere. In 2017, the third album, Decameron, is due. Even more atmospheric and tinged with blackened soundscapes, Decameron is a concept album chronicling the outbreak of Black Death in the 14th century. Laden with historical fact in an almost Maiden-esque way, the album ties the lyrics and the music together in a way rarely witnessed within the genre. From the shores of lake Issyk-kul (Kyrgysystan)

to the bands native county of Ostrogothia, the album takes the listener on a journey in more than one way.