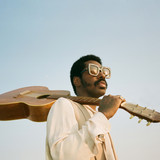 Growing up, Curtis Harding’s mother used to tell him, “Give me my flowers while I’m still here.” It was a phrase that stuck with the talented singer and multi-instrumentalist through the years, a reminder to show his love and appreciation for the people he cared about before it was too late.

“That’s what this album is,” Harding reflects. “It’s me giving my flowers to the world, to anybody who needs to hear what these songs have to say right now.” Harding’s been searching for comfort and peace in music as far back as he can remember. Born in Saginaw, Michigan to a mechanical engineer and a gospel singer, Harding spent much of his formative years on the move, bouncing between north and south until his family ultimately landed in Atlanta. He learned to sing and play drums in church with his mother, who introduced him to the likes of Mahalia Jackson and Mavis Staples, but it was his sister’s collection of hip-hop tapes that would push him towards a career in music and inspire him to begin writing and rapping. With the Atlanta scene exploding onto the national stage at the time, Harding picked up work promoting artists on the legendary LaFace label and he soon found himself in the studio and on the road as a backup vocalist with some of the city’s biggest stars.