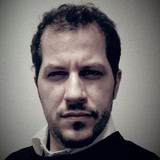 Originally trained as a classical violinist, Luca Bash took up the guitar on impulse. Falling in love with the creative process, he studied at the University of Music in Rome, Italy. Later, he formed a band called Bash. After the band dissolved, he hooked up with guitarist Giova Pes, resulting in the un-released CMYK, an acoustic project Luca and Giova used to "print" all the things they played over the years. In 2019 a new collaboration with Interbeat gave the impulse for the first LP. Luca invited the old friends and musicians for arranging the last Luca's 10 years. The result is called "What Is Left" On that Album, Luca provides vocals and rhythm guitar; Alessandro Cioffi sits in the pocket; Alessandro Matilli is on keyboards; Riccardo Ascani plays bass; Giova Pes plays lead guitar; and Duilio Ingrosso is on sax.