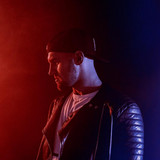 Born Dmitry Semakin, Same K is a Russian music artist known for his progressive house tracks written for the biggest international electronic music labels such as Anjunabeats and Statement (Armada Music), working together with Above and Beyond. Same K took the challenge to write songs about the universe of the film stretching his boundaries to different music styles, from R&B, Pop, to Brazilian sounds. This brave endeavor resulted in a colorful house pop album with 10 tracks. Each track of the album features a different singer/songwriter from the most diverse backgrounds. Among them are Cee Lo Green's protege, queer artist Diimond Meeks - Sony Recordings Artist, and Terrell Carter - cast member of FOX's Empire. Same K tracks get to top spotify playlists, such as Night Rider and Dance Rising. Track "Distance" collected over 900,000+ plays on Spotify.