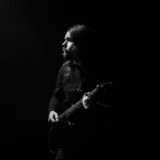 James Norbert Ivanyi is a multi-instrumentalist, producer, and independent solo artist hailing from Sydney, Australia. After completing his music degree he honed his abilities producing records and touring in a diverse range of artists and bands before focusing his attention on a solo instrumental career that officially launched in late 2013. Since that time, he has released four critically acclaimed solo albums. ‘Aphasia’, ‘The Matter Circumvention’, ‘The Usurper’ and ‘Denalavis’ respectively, with the first full length since 2017 ‘Omen Faustum’ announced for October 20th, 2020. He is considered by his fans, peers and industry to be one of the most original, commanding and versatile guitarists on the instrumental scene today. His unique style of technical, modern progressive metal fused with the classic psychedelic rock sounds of the 1960’s & 70’s has seen his broad fan base transcend genres and generations. James has performed countless shows, including nationally (Caligula's Horse , Circles , I Built the Sky), with support slots (Katatonia , Soilwork, Haken) and festival appearances and successful headlining tours. He was also one of the featured touring artists for ‘Progfest’ in 2017 & 2018 (Monuments, The Ocean) and UK Metal Tech-Fest 2017 (The Black Dahlia Murder , Northlane, The Faceless) as well his own hugely successful headline tours. Represented​ ​by​ ​​Destroy All Lines​​ ​in​ ​Australia. Bookings:​ b​​ookings@destroyalllines.com