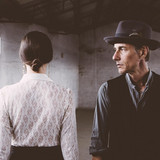 Son Of The Velvet Rat

Featuring Son Of The Velvet Rat

SotVR capture the sweltering heat and arid wind of the sandy landscape they now call home. ... haunting folk noir melodies.” —Paste Mag. SON OF THE VELVET RAT is the family business of Georg Altziebler and Heike Binder, a husband-and-wife team who left their home town of Graz, Austria and the cloistered safety of the Continent for the endless highway of America, finally settling in Joshua Tree in California’s Mojave Desert in 2013. Situated at the vanguard of Euro-Americana, their songs build on the cabaret traditions of Old World masters like Georges Brassens, Jacques Brel and Fabrizio De Andre, now fused with the dark Old Testament prophecy and Kabbalistic visions conjured by Townes Van Zandt, Leonard Cohen or Bob Dylan. The result, as realized on their 2017 U.S. debut Dorado, is like some exotic desert fruit of indeterminate provenance -- equal parts ragged glory and brooding noir, the crepuscular glow of the violet horizon and blood pooled on a motel bathroom floor -- all delivered in what accidental fan Lucinda Williams, who caught their set one night at the Hotel Café in Hollywood, calls Georg’s “great sexy-gravelly voice,” leavened by Heike’s translucent harmonies, like roses circling a tattooed heart. (Paul Cullum).

As producer Joe Henry puts it in the liner notes for Dorado: “We didn’t so much arrange the songs as set traps for them; and as such, the clear-eyed deer of our collective desire walked right up to our threshold and ate from our hands.