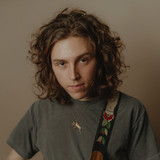 At the age of 14, I discovered one of Nashville’s best kept secrets, The Don Kelley Band at Robert’s Western World. This legendary house band played five nights a week, four hours a night, and regularly hosted Music City’s finest guitarists. The band’s approach to their 100+ song setlist of classic country and bluegrass music was unique and packed out Nashville’s most famous Honky Tonk on a nightly basis. For three years, every Saturday, I gave the band my business card, in hopes that I could join their legendary roster. I got the gig. 464 shows, 1856 hours, and 20,880 songs later, the ways of this band live and breathe in every note I play and sing. The COVID-19 pandemic ended this band’s career, and in tribute to the immense inspiration they brought to Nashville, “Cosmic Country & Western Songs,” was born. The songs and sounds from this album are the sounds of Nashville’s finest country band rocking the house in Music City’s most famous Honky Tonk on a Saturday night, with a twist of #CosmicCountry woven in.