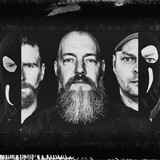 Since their foundation in 2013 IRON WALRUS have already released two albums, in December 2017 their third long-player ‘A Beast Within’ will be out. In support of their first two releases ‘Insidious Black Sea’ and ‘The Plague’ (both on Redfield Records) the quintet from the north of Germany played a great number of shows with some of the scene’s biggest acts as well as a number of headline shows. After the release of the second record the band did its first headline tour in Germany and even two support runs with CROWBAR through Europe. Festival highlights were appearances at the Rockavaria Festival with IRON MAIDEN, SLAYER, IGGY POP or GHOST, the Deserfest in London and Stoned From the Underground. Musically IRON WALRUS can be classified as sludge metal band including a nice share of doom and noise core. Low-tuned and catchy riffs that unfold their doomy energy in the mid-tempo segment, the enormous punch of the drums, bass lines that add even more deepness as well as the brute vocals that show the listener the ropes - the tightness of the band is always on point! But IRON WALRUS are not just slowly steamrolling their fans, they also raise the tempo until everyone and everything is dragged along. No one is able to resist this groove! The new album ‘A Beast Within’ is presenting the constant progress of the band. IRON WALRUS have proven in just four year of their band history that they’re not only outstanding song-writers they also know that their listeners want: Metal!