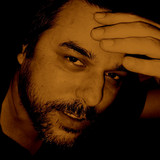 Nery Bauer is his own Malcolm McLaren: he plays, records, produces, mixes, and prepare all the graphic and videos for his own work. Coming from a heavy-metal background, Nery turned to underground electronic music of artist such as the early Amon Tobin and also Funk Porcini. He defined his aesthetic through these influences, but also working in collaboration or as a producer for other musicians, such as Rapazzi (transnational collective that he is part of), and Zero DB (he remixed one song released by the Ninja Tune label). With his own solo project, he released to vinyl singles with Fluid Ounce