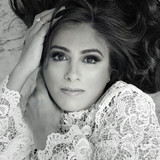 Monica Logani is a solo piano artist with classical and world music influences that reflect her multi-cultural identity. Monica’s first album, Secret Garden, hit the top 20 in the Zone New Age charts and was nominated for best Piano album with Instrumentation in 2016 by One Music World Radio. Her second album, The Long Road, is a spiritual narrative about life and loss. It hit the top 5 on the Zone New Age Charts in the first month it released. Monica's music can be heard on the Sirius XM Spa channel and radio stations and airlines around the world. It is streamed in 86 countries.