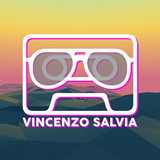 Born and raised in a cloudy city in southern Italy, I started to approach music as a child. At 6-7 years old I played my mother’s wooden spoons. I loved playing “In the air tonight” on my straw chairs, but I had to stop when all my chairs broke, so I asked my parents to buy wooden chairs and maybe to change instrument, and I started going to piano lessons. At the age of 14 I switched to guitar, playing in some rock and metal bands and doing my first live concerts here and there in Italy. In 2004 I fell in love with electronic music and started my first one-man-band project: “Schatten”, already with that touch of the ’80s. In the summer of 2011 I changed the moniker “Schatten” in my real name, Vincenzo Salvia, and I started working also for some TV commercials (Mediaset) and soundtracks. The breakthrough was summer 2012, when I released “Voyage“, my first real synthwave album, and I officially entered the scene. I also founded Sunlover Records (an indipendent label) with some of my friends, so maybe you can show us some love! In 2017 I moved to Milan and started my live acts here in Italy and around Europe (Berlin, London...) 2018 is the year of Stranger Things 3: I've been featured in the first episode with my track "Italian Gigolo". But now… The road is going to be long, so… turn on Spotify and good travel!