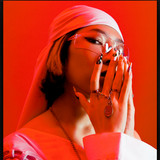 Raised by a conservative family in Indonesia, @Ramengvrl was an unlikely candidate to become her nation's foremost female hip-hop artist. She started making ‘bedroom’ demos as an escape from her mundane routine 9-to-5 job, her career taking off in 2016 with her first single “I’m Da Man”. Since then achieved wide-spread success in her homeland via “CA$HMERE” which won her the title of Hip Hop song of the year. Ramengvrl’s quirky, straight-to-the-point yet fashionable style has won over the likes of VICE, THE FACE, ONES TO WATCH and DJ MAG, pushing listeners to be true to themselves – a simple theme, but one that resonates for Indonesians who have mostly had to live up to society's expectations. Now she’s joined forces with the mighty US based label & distribution company EMPIRE, which is home to releases from icons like Kendrick Lamar, Iggy Azalea, Snoop Dogg, Tyga, Busta Rhymes, Anderson.Paak. Her most recent release ‘Vaselina’ features euro, the track's hypnotic production comes courtesy of Grammy-nominated, Platinum-certified producers Roark Bailey (Post Malone, Lil Uzi Vert, Drake, Playboi Carti, Nicki Minaj) and Omega (Iggy Azalea, Chloe x Halle, Big Freedia). Ramengvrl's personification of the ‘no B.S.’ spirit is what youths of all backgrounds desire to embody. With so much more planned for the remainder of 2020, “Vaselina” is a global introduction to the wonderfully intriguing world of Ramengvrl – expect much more to come in the coming months.