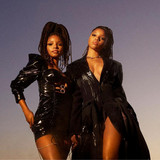 Sisters and actors Chloe and Halle Bailey, aka Chloe x Halle, are also self-taught musicians and producers whose recordings have roamed from mature acoustic pop to sparse contemporary R&B. Signed as recording artists to Beyoncé's Parkwood Entertainment, they made their full-length debut with The Kids Are Alright (2018), which led to Grammy nominations for Best New Artist and Best Urban Contemporary Album. Since then, they've hit the Top 20 of the Billboard 200 with their second LP, Ungodly Hour (2020). Separately and together, the Atlanta-born, Los Angeles-based Baileys established themselves in Hollywood with roles in films including The Fighting Temptations, Last Holiday, and Joyful Noise. In 2012, they made their first Disney connection with contributions to a pair of Radio Disney releases, won Radio Disney's Next Big Thing award, and appeared the following year on the Disney television series Austin & Ally. The show's soundtrack, Austin & Ally: Turn It Up, featured their "Unstoppable" in 2013. That year, the duo also released Uncovered, an EP that contained elegant covers of hits by Lady Gaga, Miley Cyrus, and Katy Perry. They signed to Parkwood Entertainment a couple years later, after their cover of label head Beyoncé's "Pretty Hurts" went viral. The Baileys appeared in Beyoncé's Lemonade, and within a week of the visual album's release, they made their Parkwood debut with the five-track Sugar Symphony EP. Its most popular cut was "Drop," a song the Baileys wrote and produced. Later in the year, they were featured on Michelle Obama's charity single "This Is for My Girls" and opened for Beyoncé on European dates of the Formation world tour. The pair issued The Two of Us, a self-released mixtape, in 2017. In March 2018, Chloe x Halle returned with their full-length debut, The Kids Are Alright. Chloe either produced or co-produced most of the songs, while Halle assisted on several of them. The album reached number 139 on the Billboard 200 chart, and was anchored by the title track and the single "Grown," the theme song from the television show and Black-ish spin-off Grown-ish, in which they played classmates of series star Yara Shahidi. Also included was the song "Warrior," which appeared on the soundtrack to the fantasy-adventure film A Wrinkle in Time. Grammy nominations for Best New Artist and Best Urban Contemporary Album raised the duo's profile even more. In 2019, they issued the singles "Who Knew" and "Thinkin Bout Me," both of which were also featured on Grown-ish. The duo's second album, Ungodly Hour, arrived in June 2020. Sounwave, Disclosure, and Mike WiLL Made-It were among the roster of higher profile production collaborators on the album, which entered the Billboard 200 at number 16. ~ Andy Kellman, Rovi