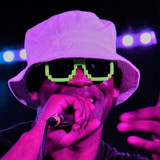 Ohm-I is known for his music that primarily focuses on storytelling and comedy from a nerdy perspective. He is a ten year Navy veteran and current professional hacker with a strong penchant for causing you to involuntarily dance and sing along. He has performed at several major anime/gaming conventions and heavily supports spreading awareness of information security careers to kids in underrepresented communities. Ohm-I has performed at SOE Live, PAX West, PAX South, Otakon, SXSW and various other cons and venues all over the country.