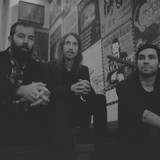 With their latest album Blood Year, Russian Circles forsake the sonic crossroads of divergent musical paths found on albums like Guidance and Memorial to offer up the most direct and forceful collection of songs in their discography. With Sullivan, Turncrantz, and Cook all residing in different states, Russian Circles have typically crafted their albums by piecing together song fragments and home recordings into meticulous texture-rich studio productions. But after seven tours in North American and five trips to Europe in support of 2016’s Guidance, the band made a conscious effort to approach the songs on Blood Year with the same organic feel of a live show. While it retains the dexterity, multi-faceted techniques, and dramatic compositions that have been a trademark of Russian Circles since day one, Blood Year fully embraces the most powerful aspects of the band’s repertoire. The Chicago trio have always explored the dynamics of volume and timbre, with their albums often vacillating between caustic attacks and blissful respites. From Mike Sullivan’s riff-fueled assaults, to Dave Turncrantz’s war machine rack and floor toms and Brian Cook’s meat grinding bass lines, the sound of Blood Year is that of a band unafraid to flaunt their hard-earned prowess. Russian Circles returned to the studio with Kurt Ballou to record Blood Year, but this time they tracked it in Chicago at Steve Albini’s Electrical Audio where previous albums Enter, Geneva, and Memorial were recorded.