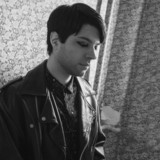 Themis‘ emotional songwriting draws his listeners to the darker side of indie music. After having released his first EP The Glare in 2019 and constantly playing at german clubs and festivals, his critically acclaimed songs embrace a raw, but also dreamy alternative-sound mixed with an androgynous attitude which may remind listeners of artists the likes of Placebo, PJ Harvey and The Smashing Pumpkins. 90s Rock meets Queer-Power. In the latest single Two Birds Fly, Themis delves much deeper into the intoxicating mix of dark, reverberant vocals, grungy rock-riffs and feedback-chaos and offers a closer look into the exciting body of work which will be released with the DIY-style-produced music video, shot in New York City. With his new management, Themis is currently preparing the release of his debut-Album coming out in October.