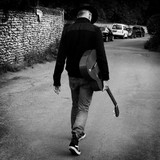 Before headlining in clubs and festivals across the UK, Steve Gifford had already made a strong local connection with new audiences around his home town of Milton Keynes. These fans loved original acoustic song writers and folk roots music. This creative environment led Steve to release his first album, “Cut and Run” in 2002. He was subsequently invited to support a host of bigger names such as The Strawbs, Lindisfarne, Ten Years After, Carl Palmer and Grammy Award winner Shawn Colvin. "The Steve Gifford Band'' were highly regarded on the smaller gig and festival circuit, touring the UK for 8 years until in 2016, to find inspiration for his latest album “The Gods Will Decide” (2019), Steve decided to travel to the Scottish Highlands where he toured, performing songs accompanied on cello by his cousins, Hilary and Sacha. Leading up to 2020 Steve completed a series of solo gigs in the USA, Canada, Italy, Holland and Spain. In early 2020 the pandemic struck. Despite the absence of live gigs Steve found this an extremely creative time for writing new material. In April 2020 he launched a series of live Facebook gigs from his home. These live gigs are to be continued in 2021 and are now fondly referred to as "The Ironing Board Sessions" after having to tape the mobile phone he used to video his performances to an ironing board. Having released six studio albums over 18 years, Steve Gifford remains one of the most prolific songwriters in the UK today.