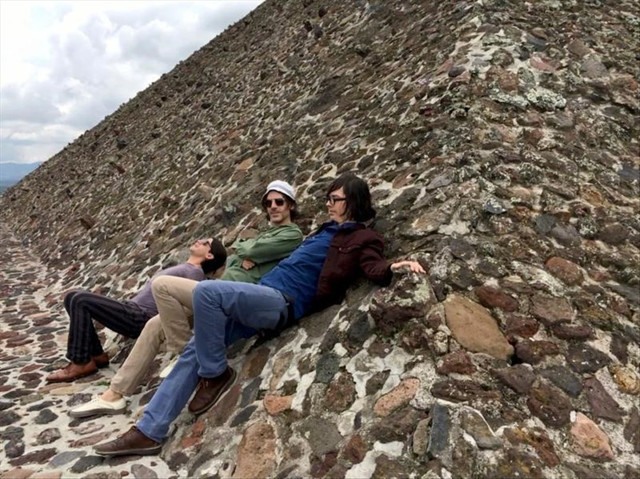 Dead Meadow's unique marriage of Sabbath riffs, dreamy layers of guitar-fuzz bliss, and singer Jason Simon's high-pitched melodic croon have won over psychedelic pop/rock and stoner rock fans alike, while elements of folk and pop would creep into their formula over time. Although the band's members met while attending all-ages shows in and around Washington, D.C.'s punk/indie scene, the trio draws more of its sound from such classic rock legends as Pink Floyd and Black Sabbath. The trio formed in the fall of 1998 out of the ashes of local indie rock bands the Impossible 5 and Coulour, with singer/guitarist Simon, bassist Steve Kille, and drummer Mark Laughlin. The three members set out to fuse their love of early-'70s hard rock and '60s psychedelia with their love of fantasy and horror writers J.R.R. Tolkien and H.P. Lovecraft. They released their six-song debut album in 1999 on Fugazi bassist Joe Lally's Tolotta Records and a joint vinyl release on D.C. indie label Planaria Records. In 2001, the band released its second and third albums, Howls from the Hills and Dead Meadow, on Tolotta. Within a relatively short period, the D.C. trio received offers to tour with everyone from local D.C. hipsters the Make-Up to seedy psychedelic rockers Brian Jonestown Massacre; eventually, they landed the opening slot for high-profile indie veterans Guided by Voices. The group was also invited to record live for longtime cutting-edge British radio personality John Peel for BBC Radio 1. Got Live If You Want It! arrived in 2002; that year, the band lost Laughlin and found a new drummer in Stephen McCarty. The band moved to Matador for 2003's breakthrough Shivering King and Others, one of their best-focused efforts to date. Cory Shane joined the band in time for 2005's Feathers, a more melodic set that turned up Dead Meadow's folk and psychedelic influences. The band embraced a harder attack on its fifth studio album, Old Growth, which followed in 2007. In 2010, Dead Meadow released Three Kings, a live album and concert film in the tradition of The Song Remains the Same. Later that same year, an Australian tour was announced that would include original drummer Mark Laughlin, eventually developing into a full-on reunion tour of the U.S. and Europe and Laughlin's official return to the band as 2011 began. The group spent a long, patient time self-producing and recording 2013's epic double-album-length release Warble Womb, the first Dead Meadow album made by the all-original lineup since 2001. The reunion of the original lineup didn't last long, as Laughlin left the group, with Juan Londono taking over on drums. In 2017, Xemu Records released The Peel Sessions, a six-song set recorded in 2000 in Arlington, Virginia -- the only Peel Session to be recorded outside of the U.K. -- and originally issued as a limited-edition vinyl-only release. March 2018 saw the release of The Nothing They Need, a relatively contemplative set that gave the noisy but folky side of their personality a hearing. ~ Rick Kutner & Mark Deming, Rovi