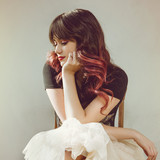 Nebraska-born Belles’ journey is a story of a family affair blended with writing songs on Nashville's Music Row for the past 4 years, months of viral Tik Tok success, and touring the world. As a band, the singer-songwriter’s work involves her drummer, Drew Rizzuto – her Berklee College of Music educated brother -and her mother, Mulberry Lane vocalist/guitarist Jaymie Rizzuto. Belles will once again be main support for JoJo Siwa's D.R.E.A.M. Tour in January - March 2022, visiting 37 arenas across the US and Canada. This, after opening for JoJo on all dates of her 2019 D.R.E.A.M. Tour, which also included the UK and Australia. Belles has appeared on New Music Nashville and Texas Country Now Spotify playlists, Apple Music's Cool County playlist, and CMT.

They have opened for Old Dominion, Dan + Shay, Brett Eldredge, Lee Brice and will be on tour across the US next summer. Belles has been named Female Vocalist of the Year at the Rocky Mountain CMAs, and enjoys her time in the great outdoors of Nebraska when she is not in Nashville or on the road. BellesMusic.com