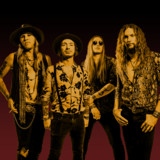 A little bit of blues. Some glam. A touch of outlaw country. All Rock N’ Roll. Formed in Gothenburg, Sweden, in 2018 The Royal Beggars quickly signed with LMH Records and set to record their well-acclaimed debut EP “Tales from Disgraceland". Followed by some gigging in their home country, the band soon enough found themselves working on new material. With their latest release “Wounded Hearts N’ Bloodstained Souls” the four-piece captures all the grit, decadence, and emotions in six tracks about lost souls, broken hearts, and spending too much time in dim-lit bars. Having renowned barstool balladeer Tyla J. Pallas of The Dogs D'Amour providing artwork, The Royal Beggars are now ready to take on the world.