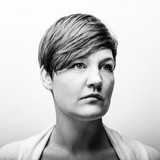 Lotte Pen stands for a new generation of classical musicians. Pen, award winning saxophonist and music composer, has played in concert halls in Tokyo, Berlin, Paris and New York. Before taking part in a number of bands and projects, she followed a classic conservatory education that she considers particularly inspiring - 'especially when you talk about composers like Steve Reich, Debussy or David Lang'- but also as restrictive. 'What I learned from pop music is the freedom that you can embrace, that you do not have the responsibility to comply with the unwritten laws of classical.'   Pen was selected as the best producer from East Netherlands for ‘Nieuw Electronic Waar 2018’ and her track "Tabernacle" was picked up by an Italian documentary maker who uses it as a soundtrack. Lotte Pen composed music for children dance society ‘De Stilte’ and ‘Tuinfeest-Literair Festival’ in Deventer, Netherlands.