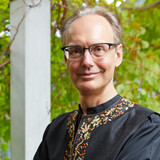 Composer and pianist Michael Harrison (called “an American maverick” by Philip Glass) is one of only a few musicians with equal training and immersion in both Western classical and Indian classical music. His music forges a new approach to composition through tunings and structures that extend the ancient concept of just intonation, a form of pure tuning constructed from musical intervals of perfect mathematical proportions. Composer La Monte Young brought Harrison to New York as his protégé. Living in Young’s Tribeca loft during this formative decade, Harrison was immersed in the world of minimal music and art. He became the only person other than the composer to perform Young’s 6-hour The Well-Tuned Piano. Most importantly, he became a disciple of Young and Terry Riley’s music guru Pandit Pran Nath, working intensively with him in the U.S. and India. Harrison has been commissioned by Grammy-winning Roomful of Teeth, Alarm Will Sound, Cello Octet Amsterdam and Clarice Jensen. His album Michael Harrison: Just Constellations was called “glacially beautiful” and “luminous” by Alex Ross in The New Yorker. Time Loops, with cellist Maya Beiser, was selected for NPR’s Top 10 Classical Albums of 2012. His evening-length work Revelation was named one of the Best Classical Recordings of 2007 by The New York Times, Boston Globe, and TimeOut New York. A Guggenheim, NYFA, MacDowell and Yaddo Fellow, he also invented the "harmonic piano," a grand piano that plays 24 notes per octave.