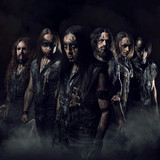 Considering the impressive history of ELVENKING, there is no chance to deny it: the Italian Folk Power Metal band belongs to the most important and unique bands of the scene. Founded in 1997, the musicians soon made their way and established themselves among the leading acts of Europe when it comes to powerful Metal music with Folk and Pagan influences. Since the beginning of their career, ELVENKING worked together with AFM Records – a strong connection that resulted into nine albums so far. In 2019, the band releases their next and tenth masterpiece: “Reader Of The Runes – Divination”. The concept album is an adventurous journey into a mystic world of runes, magic and ancient powers far away from the visible. But not only the overwhelming concept makes „Reader Of The Runes – Divination“ the maybe most epic album ELVENKING ever recorded. Musically, it is definitely an album that breathes freshness while still being totally loyal to the unique sound of the band. „The new material explores all our sounds and influences, and it probably contains the straighter material ever done by the band as well as the most extreme one. Expect big melodies, folk tunes, lots of acoustic breaks and heavy stuff in an album that those who already listened to it already consider (one of) our best ever”, the band states. With „Reader Of The Runes – Divination“, ELVENKING started a completely new chapter in the band’s existence and opened a new world to their fans and listeners.