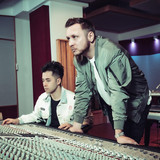 Within the last three years, EDM duo VIZE ("Vi" for Vitali and "Ze" for Zestovskih) have enjoyed unprecedented success in Germany and throughout Europe: VIZE has more than 1.5 billion streams and 1.3 million records sold, more than 20 gold and platinum awards in eight countries, plus over 40 released singles and remixes for and with the likes of Felix Jaehn, Sam Feldt, Afrojack, Leony, Dimitri Vegas & Like Mike, Papa Roach, Capital Bra, Mark Forster, Alan Walker and Tokio Hotel. The duo, consisting of producer Vitali Zestovskih and DJ Johannes Vimalavong, have also built up a reputation as a touring act within a very short time, having played gigs, shows and festivals in Asia, the UK and all over Europe.