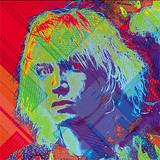 Raised in Buffalo NY, Nick was introduced to soul and blues music by his father, a DJ on the legendary radio station WBLK. His mom was a fan of 1970s glam rock stars Queen and David Bowie. Nick felt the calling from an early age. “I wrote my first album when I was 10 years old, before I could play an instrument. I would do full production and arrangements in my head. I had no idea that this wasn’t every kid’s experience.” After several years of honing his chops on multiple instruments, hundreds of home 4-track demos, and playing in various local bands, Nick moved to New York City at the behest of original KISS and Billy Idol manager, Bill Aucoin. Now, as a solo artist, Nick is releasing his fourth studio effort, No More Secrets, on November 12, 2021. The 9-song album’s themes revolve around the loss of both of Nick’s parents in recent years and the life lessons he’s learned from what he calls “intensive meditative pandemic soul searching.” Not beholden to any trends, the sound of the record incorporates Nick’s love for glam rock, funk, hip hop, disco, and lo-fi electronic music into a cohesive, distinctive sound. Fans of Nick’s previous releases will be pleased to find the expected volume of memorable hooks and “as much ear candy as possible” packed into 30 minutes.