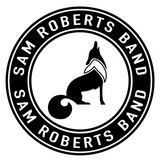 “There has always been a unique spirit that has infused the music of Sam Roberts Band. It’s highlighted by melodies that are infectious, lyrics that are deep and somewhat enigmatic, but memorable, and a live show that just plain rocks.

The music of Sam Roberts Band isn’t always easy to categorize either. It’s been often lumped in with other alternative or alternative rock bands, but there is also a substantial 1980s melodic rock vibe, mixed in with the best of 1990s Brit Pop.” (Jim Barber) Singer/songwriter Sam Roberts released his debut EP in 2002, following a popular independent demo he had made in Montreal.